Clive Staples Lewis, who we know better as simply, C.S. Lewis, was, like all of us, a complicated man. Though most of Lewis’ adult life was spent as a notable scholar and teacher at Oxford, and a world renowned writer of children’s books, and other works of fiction, science fiction, and as one of the greatest Christian apologists of the 20th century, his life was not that of a mere ivy tower, dispassionate scholar. He was a man who had found the innate, natural connection between the mind and the heart, which is revealed in his many works of fiction, as well as in his writings in defense of Christianity. Much of this life of thought and letters can be traced to one very important event in his life; his experiences on the battlefield in WWI.

Lewis was not always all that, of course.

Born on Nov. 29, 1898 in Belfast, Ireland, Lewis was sent to school in England and eventually got a scholarship to Oxford in 1916 at age 18. When WWI broke out he would enlist in the British Army, though he did not have to as an Irishman. Like so many other young men, then and now, he was not going to sit it out.

Lewis’ wartime experiences would change him in ways that will be recognizable to those of us who have seen combat. His WWI experience was one of the most influential events in his life. Those experiences in the trenches in France would transform him and shape the rest of his life. But he would not be passively shaped by them. He would struggle mightily in mind and spirit and that struggle would come out in many of his writings. In many ways, he dealt with the psychological and spiritual struggles of those memories by writing about them, getting them out from inside, concretizing them on the page. It was his way of confronting reality, and of healing, and we thank him for making that struggle so poignantly and challengingly available to all of us through those great works.

When WWI broke out dragging England into the fight, C.S. Lewis enlisted in the British Army. He was 18 years old. He was made a 2nd Lt. with the Somerset Light Infantry at age 19. At age 20 he was leading his men in the trenches in France.

On April 15, 1918, during the German Spring Offensive, near the French town of Riez du Vinage, he and his men were in the thick of it. The Germans had just moved massive numbers of troops, weapons and supplies to the Western Front, after the Russians withdrew from the war. 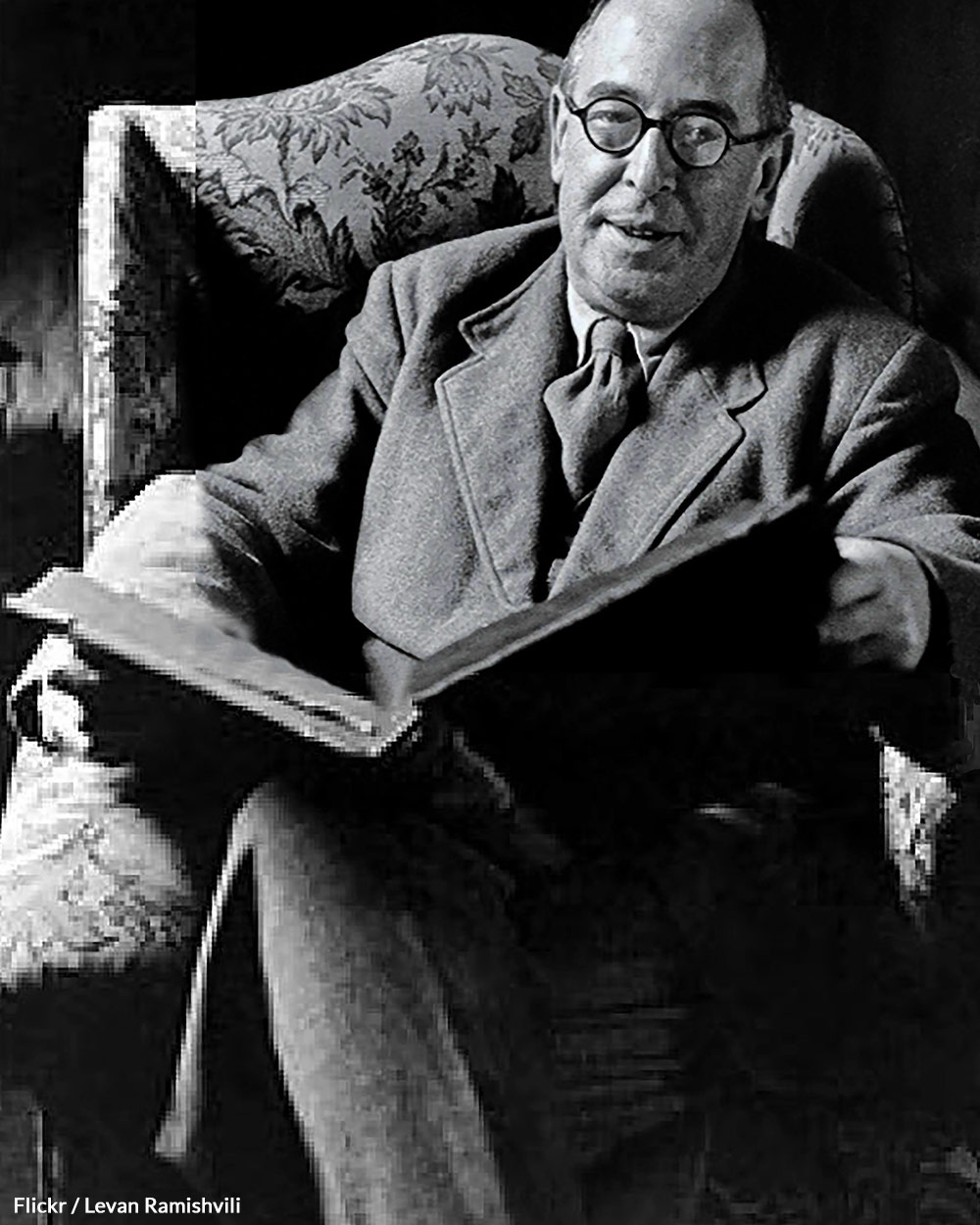 On that mid April day, the two sides unleashed huge barrages of artillery at one another. During that exchange, Lewis was badly wounded by shrapnel from an exploding artillery round. His left leg and left wrist were peppered with shrapnel and he took more of it high up on his left chest, with one of the pieces of shrapnel puncturing his left lung.

Speaking about this later, Lewis said, “Just after I was hit, I found (or thought I found) that I was not breathing and concluded that this was death. I felt no fear and certainly no courage. It did not seem to be an occasion for either.”

He was not the C.S. Lewis then that we have come to know at that time. He was simply another wounded soldier. He would be shipped back to England where, after recovering from his wounds, he was discharged and went back to his studies at Oxford. He would end up earning several degrees and become a life-long professor of Literature there. 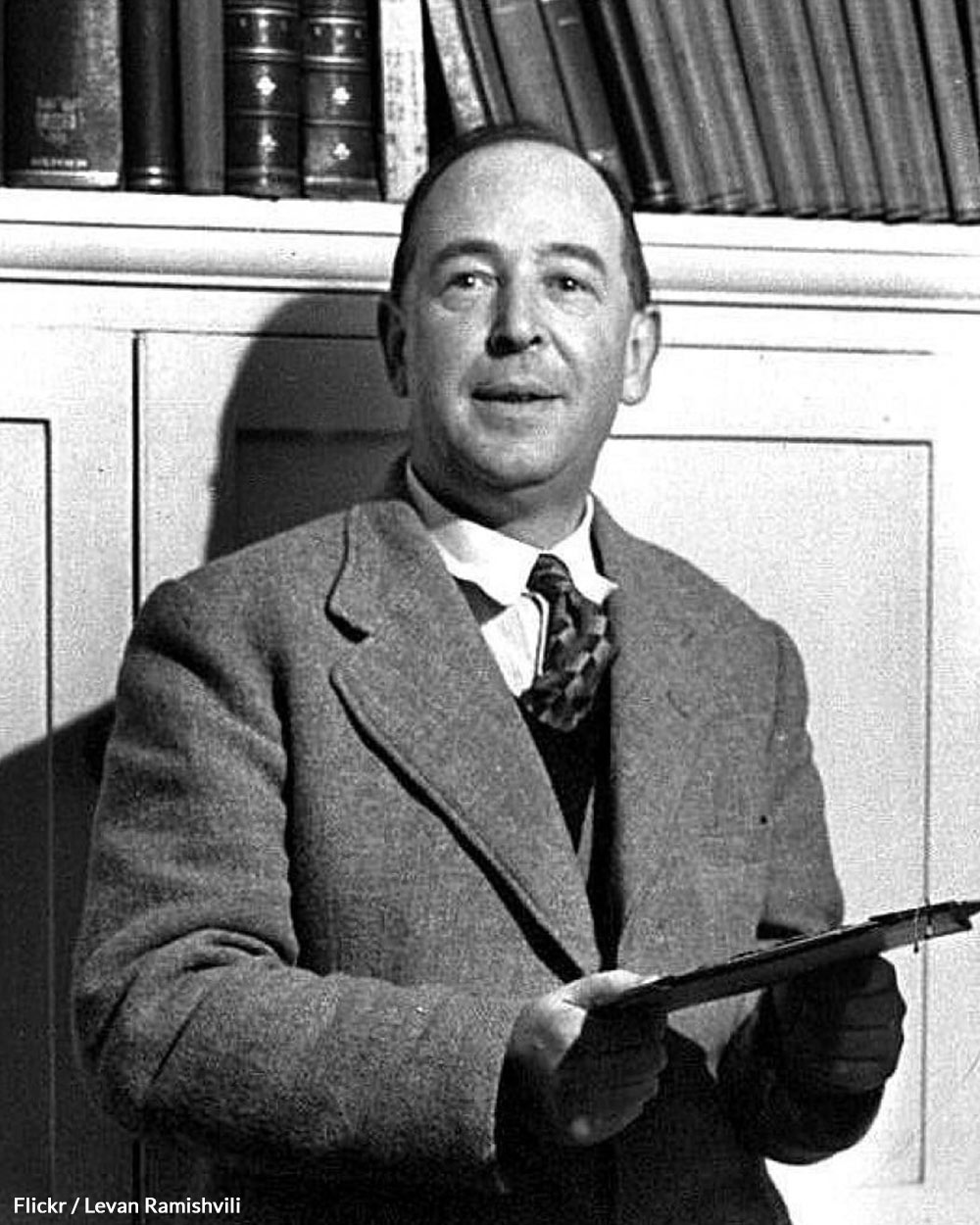 Before and during the war he had been writing poetry for a collection he titled: Spirits in Bondage: A Cycle of Lyrics. Many of these revealed his then youthful atheism, or suggested his anger at the nature of a God who might exist and who would allow such horrors to happen. The horrors he saw on the battlefield exacerbated the atheistic cynicism of his earlier teen years. But Lewis’ mind, rather than getting stuck in the boredom of an abstraction, was moved by an unquenchable curiosity. Ironically, the horrors of war also caused his curious and creative mind to confront and to struggle with the realities of good and evil he had experienced in his own life and that he observed so clearly in the world around him. He would come to see the distinction between those two realities and between such things as just and unjust wars. By 1931 he had not only become a Christian, but one of the 20th Century’s most well known and effective apologists. He came to reject the idea of pacifism and even could urge the thought of fighting as a matter of Christian duty, if the cause was determined to be righteous. His books are filled with this sense of good and evil and righteous battles pitting the just against the unjust.

At the beginning of WWII Lewis was asked to speak about pacifism at a public event. HIs objections to pacifism were dispassionate and logical. In his speech he expressed his opinion in this way: “To avert or postpone one particular war by wise policy, or to render one particular campaign shorter by strength and skill or less terribly by mercy to the conquered and civilians is more useful than all the proposals fro universal peace that have ever been made.”

His argument was rooted in reality and in the positively practical, rather than in the world of ideas, the dreams of the ideal, or the emotional.

He wrote: “I think the art of life consists in tackling each immediate evil as well as we can.”

At the age of 41, during WWII, Lewis did his duty again, joining the Home Guard. He put on the uniform again, was issued a rifle and he did regular patrols around the Oxford periphery. He was no mere talker of ideas. He understood the realities of warfare. A reading of his book, Surprised By Joy: The Shape of My Early Life,” shows that he was a man ready to face the realities of life’s experiences of real good and real evil with courage, patience and humility.

Concerning the reality of war he wrote one of the most concise and yet very accurate descriptions of war ever written and framed it in a way reminiscent of a man trying to forget what happened so he can get on with his life.

“The frights, the cold, the smell of H.E. (high explosives), the horribly smashed men still moving like half-crushed beetles, the sitting or standing corpses, the landscape of sheer earth without a blade of grass, the boots worn day and night till they seemed to grow to your feet—all this shows rarely and faintly in memory. It is too cut off from the rest of my experiences and often seems to have happened to someone else.’ This sounds very familiar to this combat veteran.

Some of Lewis’ works like “Screwtape Letters” and “The Great Divorce” deal with this confrontation between the good and evil in a very intimate way. We recognize in them things and experiences that we all face internally as individuals, and externally as groups, and as societies. They are some of the most revealing, clear, challenging and important works of literature in the 20th Century. These, too, were shaped by his experiences in the trenches in France in WWI.

In my experience as a combat veteran who has known the power of PTSD on my life, and as a lifelong teacher of literature and humanities, those two books helped me understand the great struggle between good and evil that I have known, both in the intimacy of my own heart and mind and that I see in the world at large every day. They helped me to understand myself and the world with a power and a clarity that helped me to recover my own sense of balance, freedom and empowerment.

C.S. Lewis’ life was shaped by his combat experiences in the trenches of France as a 19/20-year-old man. What he did with those experiences made him the writer, the thinker and the man that he was. He has much to share with those of us who are also combat veterans to help us understand our own suffering, to even find meaning and purpose in that suffering, to help us to transform our own lives, to find again the hope and the joy of living for others in new ways.