Iran has carried out a rare well publicised exercise demonstrating the capabilities of its MiG-29 fighter jets, which were acquired from the Soviet Union in the early 1990s and represent the most modern combat jets in its fleet. The Iranian Air Force currently fields two MiG-29 squadrons, all comprised of MiG-29A/UB variants which are the most basic models produced. The MiG-29A first entered service in 1982 in the Soviet Air Force, and other than two squadrons of F-14 Tomcats they are the only post-third generation fighters in Iranian service capable of air to air combat. Other than those delivered from the USSR, four more MIG-29s were acquired from Iraq when the Iraqi Air Force redeployed its assets to escape western bombardment in 1991. Iran planned to acquire more MiG-29 squadrons in the 1990s before U.S. pressure on post-Soviet Russia obstructed further sales. Although being refurbished domestically, MiG-29s are not thought to have been modernised with the latest R-77 active radar guided missiles. They have, however, received relatively modern R-73 missiles for short range engagements which use infrared guidance, are cued by helmet mounted sights and can engage targets at high off-boresight angles.

The R 73 was not a standard armament for export clients in the Soviet era, and the Iraqi Air Force’s lack of such missiles was seen as a key impediment to its ability to engage American squadrons at close range in 1991. It was the R-73 which was demonstrated in the most recent exercises, the advanced capabilities of which compliment the MiG-29’s extreme manoeuvrability. The Soviet jets are still considered to have the best low-speed flight performance in the world other than aircraft such as the Chinese J-10C with modern thrust vectoring technologies. R-73s were used to engage target rockets, and unlike in most exercises when special training variants of the missiles were used actual missiles from the Iranian Air Force inventory were employed indicating Tehran was carrying out a show of force. 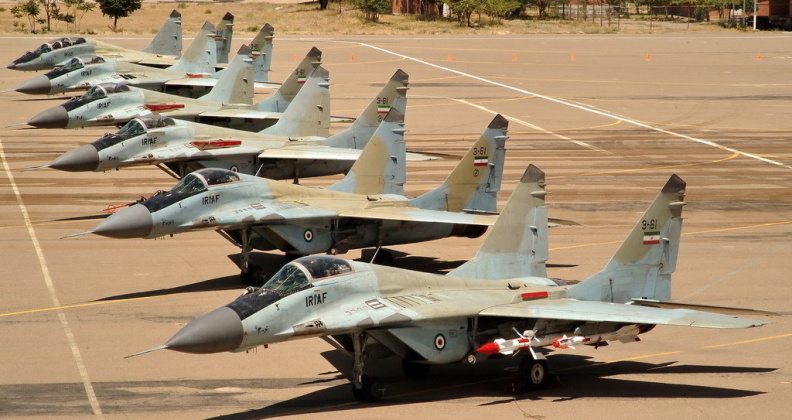 While F-14s have been assigned to guard Iranian nuclear sites, MiG-29s are relied on for the defence for the Iranian capital Tehran. They have also been deployed in the past for escorting VIP aircraft. The fighter has a relatively short range, but a much higher rate of operational readiness due to its more conservative maintenance requirements relative to the older and much heavier F-14s. A show of force by Iran comes amid high tensions with the United States and Israel over the country’s nuclear program, with negotiations with Washington dragging out and Iran continuing to produce highly enriched uranium in the meantime. Israeli officials have warned on multiple occasions that they could be willing to take military action to prevent Iran from allegedly developing nuclear weapons, although the Israeli Air Force’s ability to do so without U.S. support remains limited. The MiG-29 exercise also follows a mass cyber attack on Iranian energy infrastructure, although Iranian officials have yet to state which party they believe to be responsible. Iran has focused most of its investments in air defence on ground-based systems, including acquiring Russian S-300 systems and developing its own analogues such as the Khordad 15. A UN arms embargo on Iran ended in October 2020, and it has long been speculated that the country could acquire modern fighters with the Chinese ‘4++ generation’ J-10C seen as the most likely candidate. Whether any new fighter would replace them MiG-29 in guarding Tehran, or the F-14 in guarding nuclear facilities and other key targets, remains uncertain.