Following a reported undersea collisions in the South China Sea, the U.S. Navy’s Seawolf Class attack submarine USS Connecticut reportedly faces the possibility of being scrapped prematurely due to the extent of the damage suffered. The Seawolf Class are the most expensive submarines ever produced outside France, with each costing $3-3.5 billion, and are some of the Navy’s most highly prized assets. Only three of a planned 29 were ever built due to their extreme costs. Each displaces 8,600 tons and carries 140 crew, 50 cruise missiles and a range of torpedoes. The assets were designed for long range power projection to operate offensively near or in the waters of adversaries, and the ship’s presence near Chinese waters when the accident occurred made it a particularly serious embarrassment. Following the accident the submarine limped back to Naval Base Guam where it has remained since, and despite an extended news blackout there have been multiple indications that the ship is very badly damaged. As Forbes noted: “the USS Connecticut’s mishap is a big deal and no longer a cozy internal Navy matter…. the Navy’s continued silence is doing more harm than good.” It highlighted that the issue could be “a self-inflicted wound, stemming from longstanding but long-unfixed problems within the Navy,” highlighting that the turn of events was particularly unfavourable since the ship had long been “in effect, conserved for just the type of challenge China presents.” 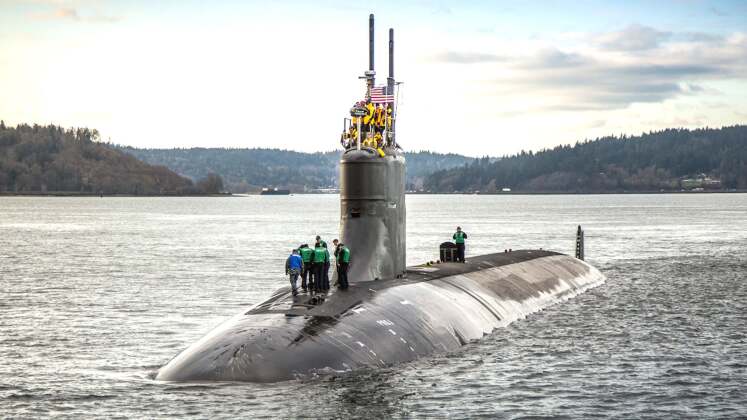 A Command Investigation is expected to be completed in December, but the USS Connecticut’s accident is likely to stress America’s submarine industry and defence budget. Reports from the U.S. Naval Institute indicate that damage has been serious, raising questions regarding whether the ship will be repaired or whether it will be more cost effective to retire the damaged ship – much as the Wasp Class carrier, USS Bonhomme Richard, was slated for scrapping after a fire onboard in 2020 due to the high costs of repairs. The fact that Seawolf Class submarines are no longer in production, and none are being retired meaning there are no available spare parts to be cannibalised, means repairs may not be viable as they would for a more widely used ship class. A thicker hull built with harder steel, which was seen as a cheaper alternative to titanium which Russian ships used, makes the exterior of the ship even more difficult to replace. Questions have thus been raised regarding whether the ship, even if repaired and returned to service, would ever have capabilities comparable to a newly built Seawolf Class ship particularly pertaining to its stealth design. This will likely affect the decision on whether to scrap or restore the ship in favour of the former option. The circumstances of the ship’s accident also remain highly uncertain, with the official report that the ship hit an uncharted undersea mountain being seen by some analysts as questionable while others have speculated that it either hit underground oil infrastructure or may have even been struck in a deniable attack by some class of undersea drones.