North Korea’s defence sector has long been among the most self reliant in the world particularly among medium sized countries, and although it’s most well-known products have included weapons mass destruction, ballistic missiles, submarines and a nationwide network of hardened tunnel fortifications, it also provides a wide range of more conventional assets. During the early stages of the Korean War battle tanks were a significant and well used asset which, according to American reports, were instrumental in allowing a North Korean force of 70,000 personnel to engage and repeatedly defeat a South Korean and American combined force of over 140,000 in the conflict’s opening months. The country’s armed forces have continued to invest in armoured warfare alongside extensive asymmetric capabilities ever since, developing several indigenous battle tanks, heavy artillery pieces and anti armour munitions. 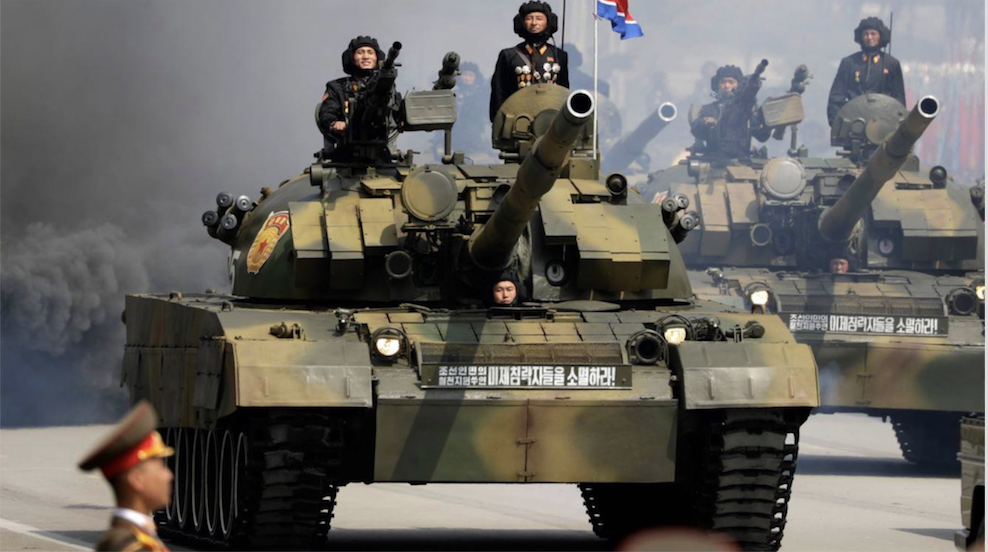 Having produced and successfully exported the Chon’ma Ho in the 1980s, which was very closely based on the Soviet T-62, North Korea sought to develop a new tank design to counter the more modern tanks being deployed by South Korea and the United States. The Pokpung Ho (officially known as  Chonma-215 and Chonma-216) was thus developed with an entirely new turret and heavily modified elongated hull with two additional wheels. The design was heavily influenced by the technologies of the successful Soviet T-72 and T-80 main battle tanks, the former which is currently in service in approximately 40 countries and continues to form the backbone of Russian armoured units. The T-72 was referred to by Syrian President Hafez Al Assad as “the best tank in the world” for its victories in Syrian hands against against advanced Israeli tanks during the Lebanon War where North Korean personnel notably played a key role in servicing Syrian armour and artillery and gained valuable combat experience.

Although the Pokpung Ho is a third generation tank and uses a gun calibre loosely derived from the T-72, its chassis is loosely derived from the T-62 which had significantly lower maintenance requirements and operational costs. North Korea’s defence industry continued to modernise the Pokpung Ho chassis with the addition of new protection systems, munitions and possibly enhanced engines. A number of reports have also indicated that North Korean technicians had access to the Russian T-90 when designing the Pokpung Ho which may have further influence the design. Its design notably began at a time when the Soviet Union was approving several technology transfers to Pyongyang particularly in the defence sector, from combat aircraft and air defence systems to nuclear technologies, and there is a significant possibility that it benefitted from these transfers particularly as the USSR previously supported the Chonma Ho program. The Pokpung Ho uses composite armour, turret reactive armour, laser warning receivers, up to two short range surface to air missile launchers, two Bulsae-3 anti armour ATGM launchers and twin grenade launchers. Its 1200hp engine provides high mobility particularly due to the tank’s relatively light weight. It remains highly uncertain whether the Pokpung Ho or other modern Korean tanks have gun launched anti-tank guided missiles, and how much the quality of these and of heat rounds has progressed since the Cold War era. General trends in the country’s defence sector would suggest that North Korea’s modern penetrative rounds are relatively capable to complement the integration of a new generation of main guns onto its tanks. The Pokpung Ho is armed with a heavy KPV anti-aircraft machine gun, a coaxial machine gun and four smoke grenade launchers. It’s primary armament is the 2A46 125 mm smoothbore gun. Along with its heavy armaments the tank also boasts limited night fighting capabilities including infrared sensors, a laser rangefinder and a searchlight. Additional reactive armour has been added over time to improve survivability. The battle tank’s ability to function as an air defence platform alongside its traditional role is heavily influenced by North Korea’s defence doctrine, which prioritises equipping all parts of its armed forces including infantry with air defence capabilities to compensate for the relative weakness of the country’s air force. How the Pokpung Ho would fare in a conflict on the Korean Peninsula can only be speculated, but the tank has been engineered specifically for war in Korea’s mountainous terrain. Able to climb and fire from extreme slopes beyond the capabilities of most tanks could give the vehicle a significant advantage particularly against heavier vehicles such as the American M1 Abrams, which unlike the Pokpung Ho would struggle to use mountain roads and bridges. Although the tank is newer than any Western design in fields such armour protection and sensors it is thought to be considerably behind. Against top end South Korean K2 Black Panther tanks its disadvantages may be overwhelming, and if facing high end threats the tank could rely on operating in mountains to gain an advantage.

The Pokpung Ho is expected to terminate production in the near future, if it has not done so already, as the Korean People’s Army moves to field a new generation of tanks which bear a significant resemblance to the Russian T-14 and are speculated to have fourth generation capabilities. The decision to develop a new generation of tanks was likely influenced by the Pokpung Ho’s diminishing ability to go head to head with top end enemy armour. Around 600 tanks are thought to have been produced, which will continue to form the backbone of North Korean tank divisions for years to come and played an important role in facilitating the phasing out of ageing Cold War era platforms. With the Korean tank’s primary weakness being its sensors, the possibility of integration with newer fourth generation tanks serving in command roles could serve as a force multiplier for older Pokpung Ho and Chonma Ho units. A further shortcoming relative to Russian and South Korean designs, which it shares with U.S. and German tanks, is the lack of an autoloader which reduces its rate of fire and increases crew requirements by one third. Its successor is expected to be the first North Korean tank with an autoloader.