In July W.L Gore & Associates put out a call for testers for a boot by Altama called the APEX. This new boot incorporates GORE-TEX THEMRIUM® and GORE-TEX Extended Comfort technology and examples have been with the wear testers for about two months. 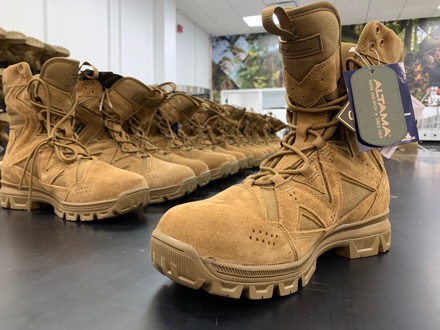 Gore has received their initial round of feedback from the testers and we thought you’d be interested in hearing what’s being said.

Before we get started, the graphic below is a reminder about the boot’s construction. You’ll want to keep this in mind when reading the feedback. As we mentioned during the call for wear testers, the boots incorporate a lightweight insulation and a membrane which won’t leave you with that clammy feeling many associate with waterproof breathable boots. 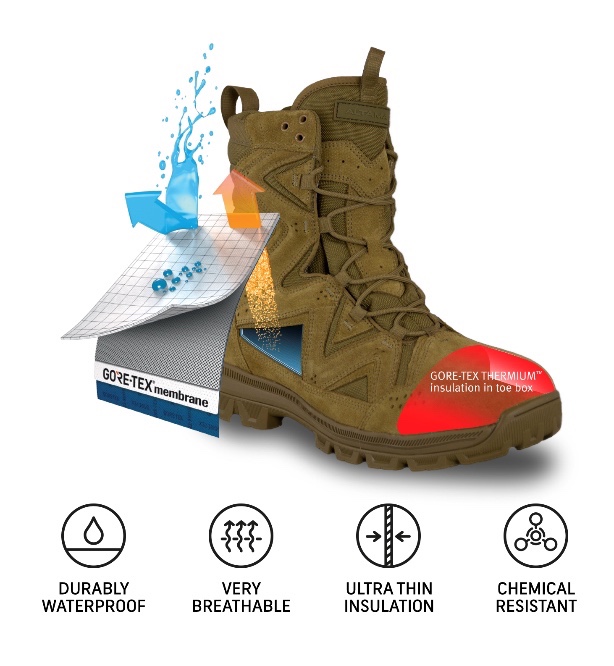 A lot of information has been collected so far and I had a chance to review a report of the feedback. Here are a few of the initial impressions from users.

First up is a statement from a user which discusses boot weight, fit and aesthetics; all from a positive perspective.

Well from the nine years I’ve been in the military, I always compare any pair of boots to the Garmont NFS which I’ve been using for the most part of my career. Straight out of the box, I love the style and aesthetics of the boots. Upon picking them up, they are extremely light for goretex boots, so that’s a major plus. Upon donning the boots, the toe box is nice and roomy which is also a huge plus. Most boots have narrow toe boxes, so these boots are definitely well though out. As well, I love the speed laces. With Garmonts, I have to loosen each row of laces individually to loosen them. With these I can put in my boots and pull the laces snug and tight. As well, the multiple lace holes is great so people can place the laces as high as they want

Now on to the GORE-TEX technologies discussed earlier.

Insulation: Most goretex boots are pretty hot. I have not had an issue with my feet sweating wearing these boots.

Finally, some comments on fit.

I was skeptical at first because I have to try on boots before I buy. Every different brand of boot/shoe fits me differently. So I was worried about the fit. I have a size 9 foot and depending on the footwear and purpose, I range from a 9-10. At first fitting, the foot bed felt like it was missing something and I followed the instructions for the additional supplied foot bed and inserted it. That fixed the problem. I was surprised it worked so well. The boots are very comfortable and have been worn everyday for a week in garrison use during pre-deployment administrative activities. Overall, they have been very comfortable and only needed a few hours break-in time.

The foot bed referenced above is a component of Altama’s TruFit sizing which allows total fit customization for each foot by the addition or removal of TruFit spacers under the footbed. Others had issues and suggested additional resources to educate wearers. Here’s an example of that feedback.

Better instructions with the trufit. I couldn’t understand the purpose of them other than if you have wide feet don’t use them. I have wide feet so I left them out. But now after two weeks of use I may put them in to try. My feet feel like they are floating a little in the boot. I honestly don’t know what they are other than an insert. Maybe a QR code to a YouTube video with an explanation and instructions

All of the information has been shared with Altama and will also be used by Gore to provide input for future design and product concepts. They are also adopting the suggestion to improve communication with customers regarding Altama’s TruFit system which customizes fit via insole components.

Expect more user feedback to follow in late January. Temperatures are starting to drop so we should expect more insight on how well they kept the wearer’s feet warm.


This entry was posted
on Monday, November 29th, 2021 at 10:00 and is filed under Advertiser, Boots.
You can follow any responses to this entry through the RSS 2.0 feed.