The French Rafale represents one of five fourth generation fighters developed in Europe, and since its entry into service in 2001 has increasingly formed the backbone of the French Air Force. The fighter first flew during the Cold War in 1986, and was developed as a ‘4+ generation’ fighter and a successor to the Mirage 2000 which had entered service from 1984. Where the Mirage was seen as a competitor to the American F-16, albeit with a much weaker engine and lack of access to comparable missiles, the Rafale was analogous in weight range and role to the U.S. Navy’s F-18 Hornet, being a lightweight design which used twin rather than single engines and had the same relatively slow Mach 1.8 maximum speed. The fighter was a cheaper and less ambitious alternative to the Mirage 4000, which was a heavyweight aircraft analogous to the American F-15 which first flew in 1979. The Mirage 4000 had a significantly longer range, higher altitude ceiling and more powerful engines but also much higher acquisition and operational costs leading to its cancellation. The Rafale was a relatively unambitious aircraft, for two decades until 2021 comfortably outranged in air to air combat by U.S. AIM-120C and D missiles, and lacking an AESA radar until 2013. This was 11 years after these had first been deployed by foreign fighter jets. Its M88 engines remain the weakest of any production fighter other than the Iranian Kowsar, and its altitude ceiling is lower even than older French aircraft such as the Mirage 2000. Although marketed  as a purely French program, the Rafale notably relies heavily on technologies and components from the United States and across Europe to a much greater extent than the Mirage 2000, without which it likely would be unable to achieve current performance levels. 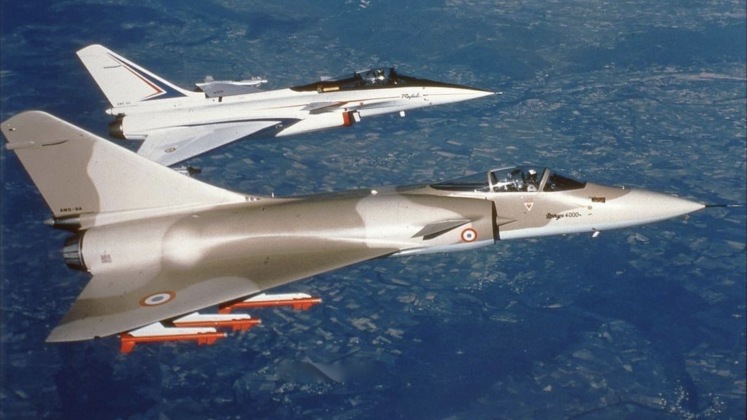 The Rafale’s reliance on foreign parts is in part a legacy of its origin as part of French participation in the Eurofighter program, with significant similarities between the two fighters. The most notable differences are the Rafale’s longer range, greater focus on electronic warfare, and much poorer general flight performance due to weaker engines. Although more conservative weapons previously used by the Mirage 2000, most notably the MICA medium range and Magic II air to air missiles, are of French origin, the Rafale’s new generation of armaments namely the Scalp cruise missile and Meteor air to air missile were both primarily developed abroad as part of larger programs. This was a result of their complexity which made it difficult for the relatively small defence sectors of any single European country to develop them. Beyond reliance on other European states, however, the Rafale is also heavily dependant on inputs from the United States. This became more widely known when an export of the Scalp cruise missile to Egypt as part of a multi billion dollar 2015 contact was was blocked after the U.S. refused to provide American-built components as part of a longstanding policy of denying Egypt access to standoff weapons. French Armed Forces Minister Florence Parly stated in response: “We are at the mercy of the Americans when our equipment is concerned.” Beyond the Scalp, the Rafale itself relied on American auxiliary power units, lighting systems, fuel nozzles, wheel brakes and brake controls, transducer, electro-optical and passive electronic components, cabin systems, canopies, fuel tank sealants, corrosion inhibitors and various mechanical components and electrical power systems. Prototypes also used the F404 engine which powered the F-18 Hornet. Although the Rafale was at largely indigenous, and unlike the Swedish Gripen E or Indian Tejas it did not rely on foreign sensors or engines, it was still a far cry from full self-sufficiency in tactical aviation for France. Indeed, other than the Mirage 2000, and various legacy fighters across the third world such as Pakistan’s Mirage 5 fleet, the Rafale remains the closest thing to a fully indigenous fighter produced by a European state. As fighter jets and their armaments have grown increasingly complex, small and medium sized producers have increasingly been forced to rely on a globalisation of supply chains, and in Europe’s case on technologies from the U.S., to produce relatively modern designs. Whether France could produce the Rafale without American inputs remains highly questionable, but it is almost certain that without technologies and components from elsewhere in Europe it would be impossible. The Rafale is likely to be the last French manned fighter ever built, with France’s defence industry unable to handle post-fourth generation designs alone due to their complexity and forced to collaborate with partners such as Germany and Spain to produce more ambitious high-tech designs.