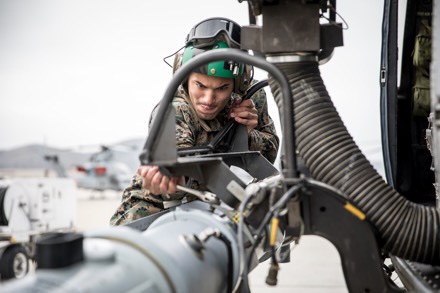 The IT II is a precision, on-demand, external carriage EW weapon system designed to provide Marine Corps aircraft with an organic, distributed and networked EW capability that can be controlled from the cockpit or by a ground operator. Its open architecture design and rapid reprogrammability give IT II the flexibility and adaptability to meet current and future threats.

The Marines of HMLA-267 are the first squadron in the 3rd MAW to conduct this style of training on the IT II with Team Ronin. Team Ronin’s signals intelligence and electronic warfare chief, Master Sgt. Chris Meser, expects to continue building familiarization with additional squadrons.

“The training was crucial in enhancing our readiness and capability,” said Meser. “By integrating with our organic rotary wing squadrons, this allowed for an improved concept of employment for future operations. This was the first of many in the training series for Electronic Warfare Integration. We intend to help foster an environment which provides a greater contribution to Operations in the Information Environment & Intelligence efforts.”

Training began with hands-on time with the IT II to develop a cursory understanding of its capabilities. Later, the system was loaded onto a UH-1Y Venom before running a variety of test-missions across its capability set to demonstrate its rapid reprogrammability. Once the practical application portion was completed, training concluded with signals intelligence specialists briefing all the systems capabilities and limitations to the pilots of HMLA-267.

1st Lt. Dylan Wesseling, intelligence officer for HMLA-267, was one of the training participants. “Communications jamming is going to be key in breaking down the kill chain for the enemy, and exploiting possible vulnerabilities,” said Wesseling. “The IT II provides the HMLA an organic electronic attack and electronic warfare support capability that is more accessible than the Marine Corps’ other high-demand, low-density assets, and I think that’s going to vital in a high-traffic littoral and maritime environment.”

While the IT II has been used in conflicts dating back to Operation Iraqi Freedom and Operation Enduring Freedom, this was the first time many of the participants got the opportunity to train with the system. Given the renewed emphasis EW is expected to play on the next battlefield, the trainees appreciated the opportunity.

“The IT II is something that allows us to be relevant when coupled with the other capabilities of the HMLA,” Wesseling continued. “There’s no sugarcoating it. The next fight is going to be tough, but training that acknowledges our need to exploit the enemy’s dependence on technology and communications are exactly what we need to come out of that conflict as the winners.”

Team Ronin is next expected to put their knowledge of the IT II to the test in February 2022 for Exercise Winter Fury 2022. Winter Fury 2022 is a capstone annual exercise that allows the 3rd MAW to refine and validate emerging service level and unit level concepts that enhance aviation readiness in support of Fleet Marine Force and naval fleet maritime campaigns. Meser plans to distribute his team throughout 3rd MAW with various rotary wing squadrons, now that his Marines have a strong foundation in the fundamentals and can teach others in a field environment. Team Ronin also expects to work with the U.S. Navy aircraft participating in Winter Fury 2022 to enhance their ability to work as a joint littoral force.

This iteration of training utilized the IT II V(3), which can be employed on the UH-1Y Venom and AH-1Z Viper. This asset is not limited to these platforms alone. Other versions include the V(4), which was recently tested on the MV-22 Osprey, and the V(1), which can be flown on the AV-8B Harrier, F/A-18 C/D Hornets, and KC-130J Super Hercules aircraft.

3rd MAW continues to “Fix, Fly and Fight” as the Marine Corps’ largest aircraft wing, and remains combat-ready, deployable on short notice, and lethal when called into action.


This entry was posted
on Sunday, December 19th, 2021 at 01:00 and is filed under Aviation, CEMA, Guest Post, USMC.
You can follow any responses to this entry through the RSS 2.0 feed.