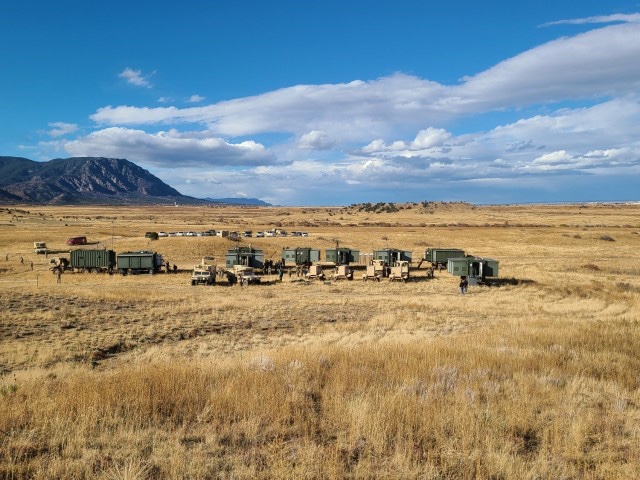 “Command Post Infrastructure Integration (CPI2) is the new command post for the division and it replaces the legacy tentage and all of the vehicles and large footprint that a division had before for their main command post,” said Maj. Jordan Funderburk, Plans Officer at the Ironhorse Division.

During the test, CPI2 systems are being evaluated on the time it takes for a division headquarters to emplace, displace, operate and move its command post to support unit missions.

The design of CPI2 enables a division headquarters to be scalable, modular, and agile while reducing the physical area required of tactical operations.

“The CPI2 system does drastically reduce the teardown of the equipment — the former being the large tent where everyone would congregate to one location,” said Maj. Christopher Sullivan, another 4th ID Plans Officer.

The Ironhorse division headquarters conducted a series of tactical movements with the CPI2 equipment, requiring them to take the system out of operation, move to a new location, and re-establish operations.

“Getting these reps in [repetitions of setting up, tearing down, and moving] has helped us develop our tactics, techniques and procedures to make this setup faster and safer,” said Sgt. Maj. Michael Bass, Division Engineer Sergeant Major for the Ivy Division.

Besides tactical movements, the division used components of CPI2 such as the Secure Wireless Mesh Remote Endpoint (SWMRE) and millimeter waveform (mmW).

“From a communications standpoint, keeping the servers and the Command Post Support Vehicle (CPSV) in a warm start means that we can have the network up as soon as we drop the trailer,” said Cpl. Jonathan Knowles, a 4th ID communications and information technology Soldier.

“These new shelters definitely help enhance my job,” added Knowles. “(CPI2) gives me the power to focus on and isolate an issue to a single thing, which in turn helps the user, get back to work in the fight. It enables me to get in and out really quickly.”


This entry was posted
on Tuesday, December 21st, 2021 at 01:00 and is filed under Army, Guest Post.
You can follow any responses to this entry through the RSS 2.0 feed.