Hannibal, Missouri, is an old town.

From the roots of renowned wordsmith Mark Twain to a historic downtown nestled beside the Mississippi River in northeast Missouri, preserving the town’s rich past remains a mission for many of its residents. 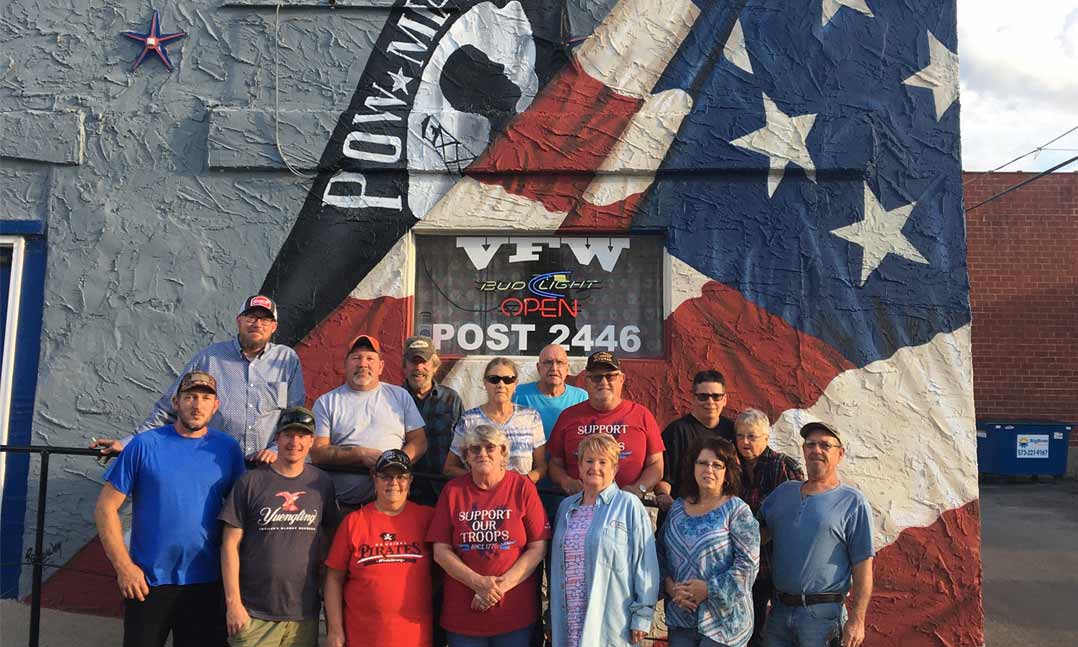 In helping revitalize Hannibal’s military history and appreciation for veterans, local residents and its more than 90 VFW members welcomed a new mural clothing the front of VFW Post 2446 in downtown on July 23.

The mural, a POW/MIA flag side-by-side a U.S. Flag that appears to be waving against a gray backdrop along the front and side of the stucco building, was painted by Ray Harvey after being commissioned by Post 2446.

“We needed to promote the VFW because we need all the members we can get,” Kolb said. “Without the younger people, we’re not going to survive. We need to get them in, and get them used to coming in now. The old regime is unfortunately dying off, and as they get older, they just can’t do any more.”

Kolb’s plan to rejuvenate the Post and thus welcome an influx of new members has gained traction since the mural’s unveiling.

From out of towners stopping by on a weekend trip to Facebook posts of Old Glory garnering more than 31,000 views and counting, the mural’s influence has made its way across the nation as a result.

“People from all over the country have seen it. That can never be a bad thing for a VFW [Post],” added Harvey. “You want veterans to know they are always appreciated and respected and they are relevant — and what they’ve done in the past makes them more relevant.”

Kolb added that the mural wouldn’t have made the impact it did without the precursors, which included work donated by Patriot Painting in 2016. The organization donated labor, paint and materials to help transform the formerly muted colors of the Post, repair its roof and exterior stucco surfaces.

The mural was paid for by the Post’s building fund, which encompasses donations from its members and other groups in the community that Kolb believes are integral to keeping Post 2446 thriving.

Post 2446’s success in increasing its visibility also prompted several phone calls to Harvey, whose work is displayed across several cities and towns in Missouri.

“I have received three calls since [the unveiling],” Harvey said. “I’d like to see a flag like that on every VFW [Post]. It’s easy in this loud, noisy day to become invisible, and you don’t ever want the veterans to become invisible.”

This article is featured in the 2021 November/December issue of VFW Checkpoint.