The United Arab Emirates has finalised a $3.37 billion contract for the sale of KM-SAM Block-II missile systems from South Korea. The agreement was signed during a visit by South Korean President Moon Jae In to the country, and made the UAE the first foreign operator of the missile system. A memorandum of understanding was also signed for joint long term defence acquisitions, joint research and development, and joint purchase and production of weapon systems. The UAE Defence Ministry first indicated plans to acquire the system on November 16, 2021, on its Twitter page. The KM-SAM was developed jointly by South Korea and Russia and relied heavily on technology transfers many of which were from the Russian S-300, S-350 and S-400 systems. It provides a medium range air defence capability with a 40km engagement range, and benefits from active radar homing terminal phase guidance on its missiles. Its X-band multi-function phased array radar is based on that from the Russian S-400 system, and it can track up to 40 targets simultaneously. The system is produced by Korean firms LIG Nex1, Hanwaha Systems, and Hanwha, and the contract represents the largest single arms deal in the history of South Korea’s defence sector. 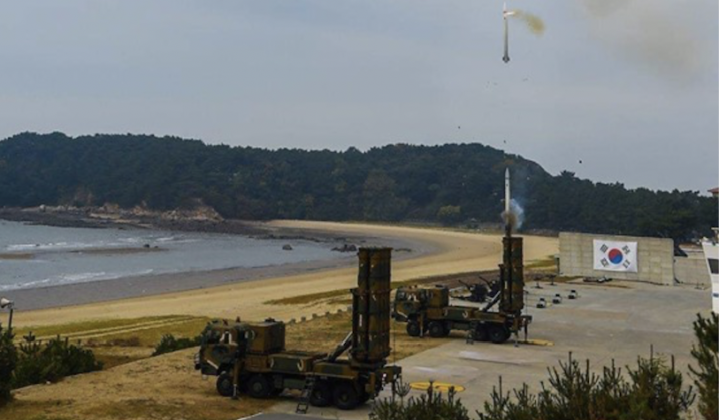 The initiation of a joint program with Russian firm Almaz-Antey followed South Korean interest in acquiring S-300s in the 1990s, which would have been partly paid for in outstanding Russian debt. Considerable pressure from the United States ultimately scuppered the deal, leading to South Korea’s indirect acquisition of Russian air defence technologies through technology transfers rather than outright sales. Development of the KM-SAM with South Korea led to Russian investments in developing a much improved variant for its own defence needs as the S-350 system. The S-350 entered service from 2019, and its 9M96 missiles had served as the basis for developing the KM-SAM’s munitions. With threats of Western economic sanctions and other forms of pressure having deterred countries from acquiring Russian military hardware, however, the KM-SAM will retain an advantage in many arms markets including those in the Persian Gulf region.

The KM-SAM Block-I completed deliveries to the South Korean Air Force in 2020, after the first units entered service in 2015, with the new Block-II variant boasting a number of significant performance improvements. The most notable improvement is the ability to engage high altitude targets at up to 20km, where the Block-I variant could not engage targets over 15km high. The primary threat to the airspace of the United Arab Emirates is seen to be the Iranian missile arsenal, which is one of the largest and most capable in the world and has expanded rapidly over the last to decades to provide greater precision and survivability and a combination of cruise missiles and both solid and liquid fuelled ballistic missiles. The majority of Iranian ballistic missiles benefit heavily from North Korean technology transfers and many are Korean designs license built in Iran. The KM-SAM was notably built specifically to counter North Korean missiles, and thus may be considered a suitable asset for the UAE.