Newly released footage by Chinese state media outlet CCTV-7 has shown that Chinese People’s Liberation Army (PLA) Air Force’s first batch of J-11B heavyweight fighters have replaced Russian-sourced engines with indigenous WS-10B turbofans. This comes as progress in the WS-10 program has effectively ended Chinese combat aviation’s dependance on Russian powerplants after over 25 years of purchases. The J-11B entered service in the mid 2000s and remained in production until 2018. It was one of several fighters powered by the Russian AL-31 engine alongside the older J-11A, the J-10A and J-10B single engine fighters, while the J-20 fifth generation fighter used the much more powerful AL-31F M2. Although the indigenous Shenyang WS-10A engine was developed in the late 2000s, performance issues including a very short operational life, excessive time to develop thrust, and questionable reliability, meant that it was not widely adopted with Chinese fighters continuing to rely on the AL-31. This changed only from the mid-2010s when the much improved WS-10B, with a performance more comparable to Russian designs, began to enter service in refined form. 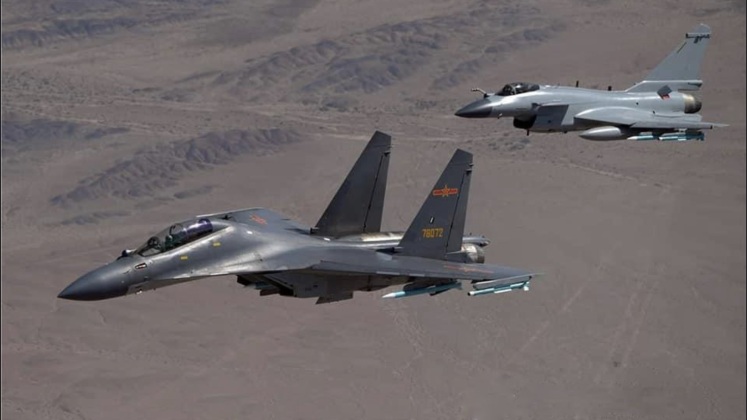 While China produced its own fighter aircraft with indigenous engines during most of the Cold War era, it was never able to move beyond second generation engine designs namely the WP13, which was a derivative of the Soviet R-13 that the PLA acquired the technologies for from the USSR in the early 1960s. When China received its first fourth generation fighter aircraft in 1991, a squadron of Su-27 Flankers, these had more thrust than any other fighters in the world and were powered by Soviet AL-31F turbofans. China’s military aviation industry was able to bridge much of the gap with that of Russia in the 1990s and 2000s, as economic decline after the Soviet collapse had slowed progress considerably, and indigenous derivatives of the Su-27 from an early stage made significant improvements to the design including superior avionics, integration of active radar guided missiles, and higher use of composite materials for lighter more durable airframes. This was a considerable achievement considering the tremendous technological gap that had existed between the two sectors, aided in part by knowhow obtained producing the Su-27 under license, but the difficulty of bridging the gap in engine performance meant domestic Su-27 derivatives were forced to continue to rely on the AL-31. This included the much improved J-11B, which when it entered service was more capable overall than any Flanker in Chinese or Russian service. While the WS-10B had begun to replace Russian engines in production, It would not be until after 2018 that the PLA would be confident enough in their reliability to allow them to power single engine fighters, since engine redundancy on twin engine designs like the J-11 meant standards for reliability could be lower. After 2018, however, Chinese J-10C single engine fighters began to use WS-10 engines which ended the final role of the AL-31 in production of new aircraft. The last Chinese orders for the AL-31 were placed in 2016 with deliveries completed in 2020. A superior version of the WS-10, the WS-10C, was also developed for the J-20 to replace the more powerful AL-31F M2, although it was thought to still have less power than the Russian design. The Al-31F M2 had entered service in the Russian Air Force 29 years after the original AL-31F had, and was thus far more difficult for Chinese industry to match the capabilities of entirely with engines remaining one of very few fields in aviation where Russia retained a lead.

Eventually some the Al-31F M2 variants powering early production J-20 fighters are expected to be replaced by designs more capable than the WS-10C in form of the much more powerful WS-15, which is currently being flight tested on the stealth fighters and will also be integrated onto future production batches of the J-20. With no more AL-31 engines being delivered, the process of phasing these out of service in older units in favour of the WS-10 marks a major milestone in Chinese military aviation and will provide opportunities for the WS-10 to be produced on a larger scale. For Russia, however, it marks the loss of what was formerly by far the largest client for its fighter engines, some years having purchased more AL-31s than the Russian Air Force itself, and one which today fields more Su-27-derived aircraft than the Russian Air Force. This places more pressure on the Russian government to sustain industry with its own defence budget and to seek out more clients abroad for its military aircraft.