Yesterday, Retired Army Major General John K. Singlaub passed away at the age of 100. He was a member of World War Two’s Office of Strategic Services, founding member of the Central Intelligence Agency and a Distinguished Member of the Special Forces Regiment. 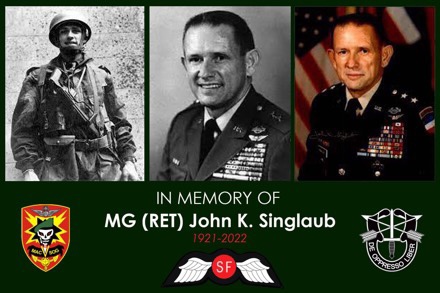 John K. Singlaub was recruited by the Office of Strategic Services (OSS) in November 1943. As part of JEDBURGH Team JAMES, he jumped into France on 11 August 1944 to arm and direct the French resistance. Sent to China, as the commander of the PIGEON Mission, he jumped onto Hainan Island on 27 August 1945 to rescue Dutch and Australian Prisoners of War. As one of a handful of Special Operations Branch personnel retained the Strategic Services Unit (successor to the OSS), Singlaub stayed in China to report on the Civil War.

Singlaub was again involved in special operations when he was an instructor at Fort Benning, Georgia and helped to establish the Ranger Training Center in 1950. He then had two tours in Korea, including one with the Central Intelligence Agency’s Joint Advisory Commission, Korea (JACK).

Singlaub returned to special operations in from 1966-1968, when he commanded a joint unconventional warfare command, the Military Assistance Command, Vietnam, Studies and Observation Group (MACV-SOG). Retiring in 1978, Major General Singlaub remained active in the Special Operations community and was recognized with the United States Special Operations Command’s (USSOCOM) Bull Simons award in 2011.

There’s no doubt that General Singlaub was one hell of a man, but the thing I respect him for the most is falling on his word over the Carter Administration’s plan to pull all US troops out of South Korea which would have assuredly led to an invasion by the north. It led to his being relieved as Chief of Staff of U.S. forces in South Korea and subsequently his forced retirement.

An ardent anti-communist, he founded the Western Goals Foundation after his retirement.

His contributions to America’s security are myriad and some of his exploits can be read in his autobiography, “Hazardous Duty: An American Soldier In The Twentieth Century.”

America needs men like this. He will be missed.

May He Rest In Peace.