Amphibious carriers have growing significantly in popularity since the turn of the century, with a growing number of countries across six continents investing in the ships and many more showing significant interest in potential acquisitions. These ships can double as both amphibious assault ships, designed to deploy marines and their vehicles to enemy shores, but are also large enough to function as aircraft carriers in many cases for fixed wing vertical landing capable fighter jets, and in others for attack or anti submarine warfare helicopters. Such ships are considerably cheaper both to build and to operate than conventional aircraft carriers, and do not require complex features such as arresting gear or catapult launch systems nor large crews. The much more limited capabilities of vertical landing capable jets, however, means that these ships cannot replace conventional carriers entirely.

Amphibious carriers are notably more versatile than traditional aircraft carriers due to their ability to easily switch roles – from supporting offensive amphibious landings to performing a defensive anti submarine warfare mission or even carrying out airstrikes with fixed wing fighters. The ships are popular not only among smaller powers which lack the funds or are unwilling to invest in heavier dedicated aircraft carriers, but also among major powers such as China and the United States which deploy the heaviest assault carriers in the world. Russia, too, laid down two heavy assault carriers in 2019 which are speculated to replace its sole conventional carrier in service. A ranking of the five most capable assault carriers in the world and an assessment of their capabilities is given below. 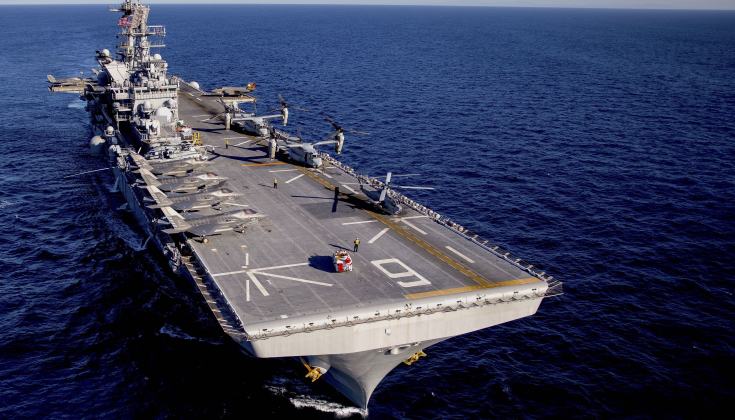 The U.S. Navy commissioned its first America Class carrier, the USS America, in October 2014, and supplemented this with the commissioning of the USS Tripoli on July 15 2020. The warships displace 45,000 tons each, making them heavier than the majority of aircraft carriers including the French nuclear powered flattop Charles De Gaulle. Several figures in the U.S. Navy and a number of defence experts have advocated placing larger orders for America Class ships in future, at a time when carriers are increasingly at risk of being destroyed by long ranged anti ship missiles which leaves the more costly 100,000 ton supercarriers extremely vulnerable. At just $3.5 billion, compared to around $13 billion each for the new 100,000 ton Gerald Ford Class supercarriers, and with a significant smaller crew, the America Class ships can be more easily deployed to contested areas with the risk of their loss posing less of a threat to the Navy’s overall fighting potential. Each ship can deploy 20 F-35B vertical takeoff capable fighters, which are the most capable fighters of their kind in the world at present  but also the most costly fighters currently in production worldwide. Although far inferior to the F-35C deployed from supercarriers, the fighters still boast a range of advanced features from network data links to powerful sensors and advanced radar cross section reducing airframes. 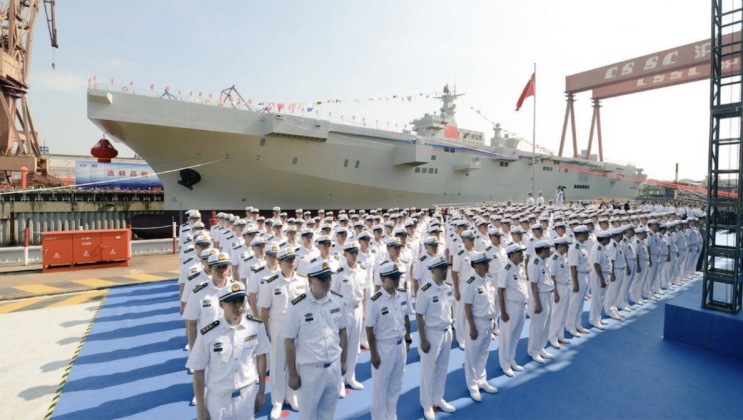 The first amphibious carrier in the world to rival the size and capabilities of its American counterparts, the Chinese Type 075 Class program represents a considerable step on the path to acquiring an advanced power projection capability and full parity with the U.S. Navy in the Western Pacific. China’s Hudong–Zhonghua Shipbuilding Company launched the country’s second Type 075 Class amphibious carrier on April 22nd, 2020, which shortly followed the launch of the first on September 25th, 2019. At 40,000 tons each the ships can land several hundred marines, their APCs and even Type 15 tanks for beach landings, but like their American counterparts they are also capable of functioning as anti-submarine warfare ships deploying helicopters such as the Z-20 and as aircraft carriers. China is reportedly developing a vertical landing capable fighter for these carriers, possibly under a joint program with Russia which is confirmed to be invested in acquiring such aircraft itself, and these will likely be equipped with a range of state of the art features from AESA radars and modern stealth coatings to PL-15 AESA guided missiles. A number of other aircraft including unmanned helicopters, which could be deployed for a range of roles from anti submarine warfare to land attack, are expected to be deployed capitalising on China’s growing primacy in the field of combat drone technologies. With China’s Navy expected to field two ski jump equipped carriers and two heavier and more advanced EMALS equipped flattops by 2025, equipping three Type 075 Class ships as carriers will provide a total fleet size of seven ships. 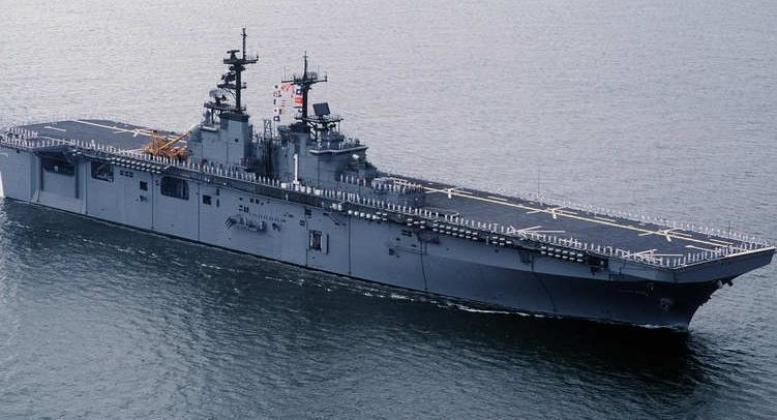 Displacing approximately 40,000 tons each, Wasp Class carriers form the backbone of the U.S. Navy’s amphibious fleet with seven of the large vessels in service. First commissioned in 1989, they are fast ageing and notably require larger crews and have much lower levels of automation than the newer America Class ships. The ships nevertheless brought a number of revolutionary new capabilities to the field when they replaced the Cold War era Tarawa Class carriers most notably a new bridge and the ability to more efficiently deploy up to 20 fighter jets – initially the fourth generation Harrier II and more recently the fifth generation F-35B. Each ship can host 1,894 U.S. Marines – almost a full expeditionary unit – and will typically carry five M1 Abrams tanks, 25 armoured assault vehicles, eight M198 howitzers, over 60 trucks and a dozen other support vehicles. 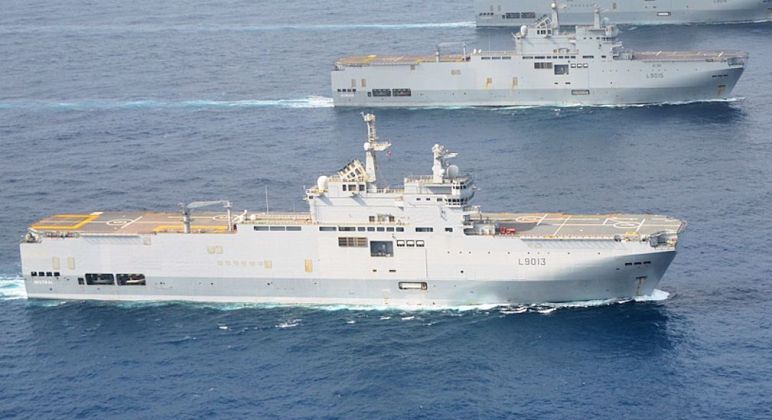 While the French Mistral Class assault ship is itself a far from remarkable ship, the two warships acquired by the Egyptian Navy the EMS Gamal Abdul Nasse and EMS Anwar Sadat have notably been heavily enhanced with Russian assistance to provide offensive capabilities well ahead of those of their counterparts serving in the French Navy. Most notable among the improvements is the deployment of Ka-52 Alligator attack helicopters from the decks of the warships, which are widely considered the most capable aircraft of their kind in the world. The helicopters notably have fire control systems which automatically share all target information in real time, allowing one helicopter to engage a target spotted by another aircraft which is particularly useful when multiple carriers are working together. They Ka-52 is very heavily armed with 12 missile racks, and alongside multiple guns it can deploy either 80 80mm rockets, 20 122mm rockets or 12 9K121 anti tank missiles and supplementary R-73 air to air missiles and Kh-25 laser guided missiles. This provides each carrier with a massive amount of firepower to support amphibious landings, turning an otherwise mediocre ship into one of the most formidable assets in the Egyptian inventory.

The Ka-52 is not only extremely well armed for an air to ground role, but is also highly capable in an anti shipping role making Egyptian Mistrals the only helicopter carriers in the world with a potent long range anti-ship capability. The helicopters can deploy Kh-31 and Kh-35 anti ship cruise missiles, with the former impacting at over three times the speed of sound and with an engagement range of over 100km. Combined with the Alligator’s advanced sensors, this allows it Ka-52 to function as a highly effective ship hunter. The subsonic Kh-35, with a range of over 300km, further strengthens the aircraft’s anti ship capabilities as a complement to its shorter ranged counterpart. This makes the Ka-52 making the only helicopter in the world armed in such a way, with these munitions normally reserved for fixed wing fighter aircraft such as the Su-30 and MiG-35. Unconfirmed reports have indicated that China’s own navy plans to acquire Ka-52 attack helicopters for its Type 075 Class vessels, although this has yet to be confirmed. 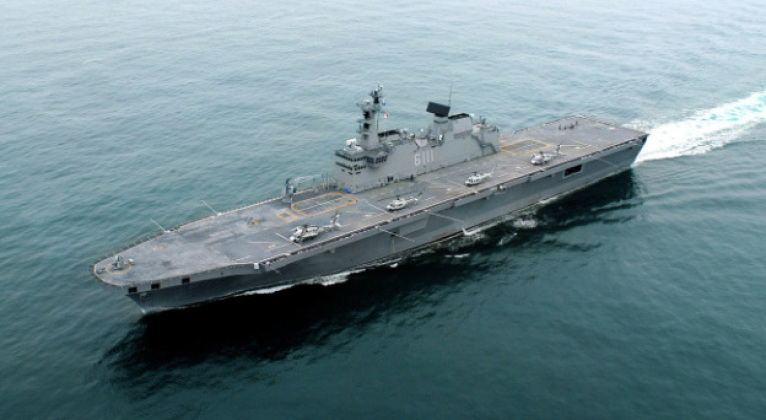 The South Korean Navy commissioned its second Dokdo Class carrier in May 2018, and the country’s defence ministry would subsequently begin to consider modifying one or both ships to operate F-35B vertical landing capable fighters. It remains uncertain whether a carrier of its size can operate fixed wing fighters efficiently, and the country’s Defence Ministry is considering acquiring a heavier class of carrier specifically for fixed wing operations. Even without fixed wing fighters however, and without any modern attack helicopter classes like its Egyptian counterparts deploy, the Dokdo is still a formidable warship for anti-submarine warfare and amphibious landings. The ships notably deploy indigenous K-SAM air defence systems, which are reportedly derived from Russian S-400 technologies providing a highly formidable air defence capability. Moreover, the ships benefit from a high level of automation and have a low operational cost making them much more cost effective than rival ships from similar weight ranges such as the French Mistral Class.

A third Dokdo Class ship is currently under construction, and around $650 million each the warships have an exceptionally low cost considerably cheaper than a high end destroyer. The small number of crew required only reduce costs further. Each ship can carry up to 720 marines with their associated assault vehicles and up to 15 helicopters. South Korea is currently developing an indigenous class of attack helicopter, and bcould be used to provide the Dokdo with a superior offensive capability in future. Russia notably initially favoured acquiring Dokdo Class ships from South Korea over Mistral Class ships from France, with the Korean vessels having a noticeable superiority, but France’s willingness to transfer shipbuilding technologies and to help Russia build more assault ships at its own shipyards led the Russian defence ministry to settle for the less capable European vessels before all plans for foreign carrier acquisitions were terminated in 2014.