Russia’s S-400 long range air defence system has reportedly seen its first combat and gained its first kill during the country’s military intervention in Ukraine, engaging and neutralising a Ukrainian Air Force Su-27 fighter near the country’s capital Kiev according to a number of reports. The shootdown reportedly took place on February 25, a day after Russian military operations in Ukraine began, when the Ukrainian Air Force had yet to suffer more serious losses. The S-400 was reportedly not deployed to Ukrainian soil, but engaged and neutralised its target from the territory of neighbouring Belarus where Russian forces retain a large presence. The fighter was reportedly piloted by Ukrainian Air Force Colonel Oleksandr Oksanchenko, a display pilot well known in the West for his airshow performances, who was posthumously granted the title of ‘Hero of Ukraine’ by Ukrainian President Volodymyr Zelensky. Oksanchenko had trained in the Soviet era, but flew in wartime despite his senior age of 53 due to a shortage of trained pilots in Ukraine. 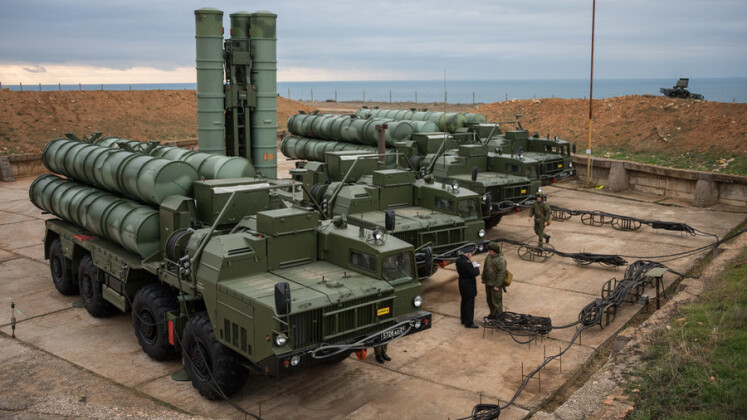 The S-400’s kill reportedly set a world record for the longest range ever for an aircraft shootdown, with the Russian air defence system until 2021 holding the record for the longest engagement range in the world until it was surpassed by the S-500 system that year. The S-400 was designed to engage targets up to 400km away using 40N6 missiles, but more widely deploys the 48N6 missile with a 250km range. The 48N6 has demonstrated the ability to neutralise Mach 8 hypersonic missiles flying at the edge of its range, and engages targets at speeds exceeding Mach 14. The S-400 is prized for its ability to engage up to 80 targets simultaneously, and its high situational awareness provided by multiple complementary radars which allow it to engage stealth targets reliably. Against the Su-27, a 1980s fighter which Ukraine has not made any notable investments in modernising since it was inherited from the USSR, the S-400 could very reliably gain kills from 150km or longer ranges.

The Su-27 has an excellent flight performance, but its lack of electronic warfare countermeasures or stealth capabilities leave it particularly vulnerable. Reports of the S-400 downing a Su-27 come as the Ukrainian Air Force reportedly lost four more Su-27s on March 5 in a major air battle over the city of Zhytomir in the country’s western regions, which are thought to have been brought down by Su-35 fighters. The ability of Russian assets to neutralise Ukrainian aircraft from such extreme ranges, and in the country’s Western regions far from the presence of Russian ground forces, provides an important indicator of how one sided the balance of power in the air over Ukraine quickly became since Russian operations began.