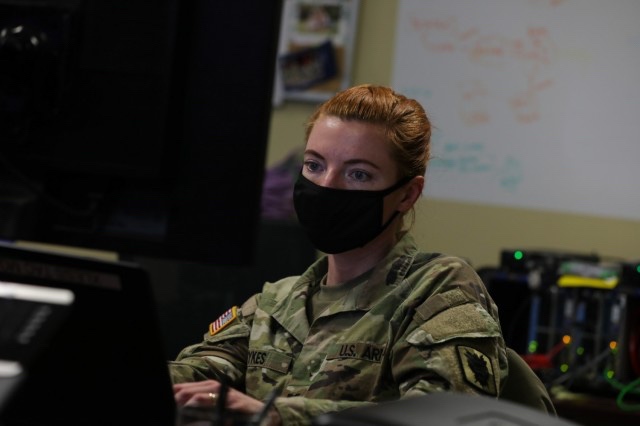 The Starlink system, operated by SpaceX, consists of low earth orbiting satellites which provide high-speed, low-latency broadband internet across the globe. The terminal is small and lightweight, featuring a .6-meter phased array antenna and weighing only 15 pounds.

“The benefit of this system is the amount of time it takes for the signal to go up into space and come back down; it saves us a lot of time on latency,” said Chief Warrant Officer 3 Kyle Neese, the senior battalion network technician for the 50th ESB-E. “The old military satellite communication system uses what’s called geosynchronous [satellites], which orbit around the equator at a steady pace, but it takes a little over half a second for the signal to travel up and back down. With Starlink, it comes back at more than twice the speed.”

The 35th CSB aims to use the Starlink system to achieve faster broadband and increase internet speed capabilities in order to support XVIII Airborne Corps’ warfighters and their mission command systems.

“The Starlink terminal is being used to provide tactical network speeds of up to 70 megabits per second with approximately a third of the normal latency over military SATCOM” said Neese. “Testing is still being conducted to increase these speeds further in support of troops on ground.”

SpaceX is also piloting the creation of a miniature mobile satellite antenna to make the Starlink system more portable.

“So far, we’ve tested version one which comes with a dish, a power injector, and a router. The simplest way to hook the Starlink up to our kit is to take an ethernet cable and plug it into our router, which connects to our cradle point router and the cradle point router connects to our other systems as normal,” said Warrant Officer Corey McClure, a network technician for the 50th ESB-E. “This is the first of its kind to come on the market, and so far, it’s been great. It’s going to allow us to be a lot more flexible in terms of where we can set up and what we can do.”

Work is ongoing to assist with compatibility of the Starlink system with some of the current SATCOM equipment that the Army has in use.

“Starlink data rates exceed some of our current capabilities,” said Lt. Col. Mallory Wampler, the commander of the 50th ESB-E. “I know they’re still doing some engineering and design modifications to make the equipment more ruggedized like our 1.2 meter Hawkeye terminal, T2C2 and our Phoenix E systems.”

Wampler said she hopes to continue leveraging commercial off-the-shelf equipment to keep pace with technology improvements. “We are always looking to provide the most redundant Primary, Alternate, Contingency and Emergency plan or PACE plan as possible to support the warfighter and all mission command systems.”

From the initial implementation of this new equipment, the 50th ESB-E, 35th CSB has been at the spearhead of testing the Starlink system to meet the modern-day demand of signal equipment.

“We had the opportunity to work with the joint staff during the Bold Quest exercise last summer,” Wampler said. “We learned it brings a significant capability to the formation, which is good to align with our scalability. The bandwidth throughput is the most crucial factor with this new equipment, and I think it directly aligns with the 18th Airborne Corps’ line of effort when it comes to innovation and modernization. This is the future, and I’m excited to see where this equipment can take us.”


This entry was posted
on Monday, March 7th, 2022 at 01:00 and is filed under Army, Comms, Guest Post.
You can follow any responses to this entry through the RSS 2.0 feed.