The 705th Combat Training Squadron, also known as the Distributed Mission Operations Center, completed the second successful iteration of its “Fury” exercises in partnership with the 3rd Marine Air Wing. The DMOC developed the virtual scenarios for both Summer and Winter Fury exercises focused in the U.S. Indo-Pacific Command area of responsibility in partnership with the Marine Air Control Group-38. 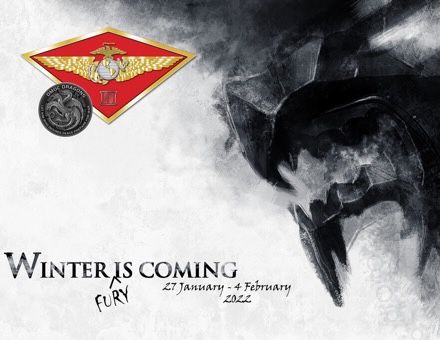 Post continued, while it is clear any large-scale conflict in this AOR requires the delegation of operational C2 authorities, most live exercises are not ideal places to practice these advanced concepts.  Since SF and WF exercises include a combination of virtual- and real-training evolutions, they allow commanders to enact the delegation of operational C2 authorities traditionally held at the Air Operations Center and the Tactical Air Command Center to tactical C2 agencies.

“The DMOC is the perfect place to get in the reps to learn how to make decisions in a communication degraded and denied environment because there is little to no risk if you make mistakes.” said USAF Lt. Col. Michael Butler, 705th CTS director of operations. “Enabling mission continuation and accomplishment in the absence of robust communication between C2 entities is inevitable in areas of operation such as INDOPACOM.”

WF 22 was focused on the continuation of tactics, techniques, and procedures development and experimentation for the USMC TAOC and DASC to merge into one tactical C2 unit.  MACG-38, the C2 organization inside of the 3rd MAW, was designated by the USMC Air Board as the lead for MAOC experimentation and development based on the “Fury” exercises at the DMOC.

The USMC intends to make the MAOC the primary tactical C2 node for the air domain in the Marine Air-Ground Task Force. This concept was briefed at the Weapons and Tactics Conference, or WEPTAC, and is sparking USAF tacticians to use the DMOC for concept development.

“The DMOC is bridging the multi-function C2 gap and bringing the best the brightest from the Marine Corps and Air Force together.  We identified many opportunities to integrate Marine Corps and Air Force TAC [tactical] C2 that will ultimately help us succeed in potential peer fight in the Pacific,” said USMC Capt. Kevin Cao, USMC Winter Fury 22 MACG-38 Virtual Officer-In-Charge, USMC Base Camp Pendleton, California.  “This is vital as we seek training opportunities where there is little risk to mission or force and it is enabling us to experiment and advance Force Design 2030 initiatives.”

According to Butler, elements of the USMC and U.S. Navy used this scenario as a proof of concept, so they did not always operate within established service doctrine, capitalizing on the virtual battlespace and what the DMOC offers warfighters.

“We can generate the scenarios and connect the right players virtually to put decision makers at any level in situations that these theaters will demand. Get the sets and reps in here, make mistakes, try new concepts/tactics, fail and keep failing until we get it right; before they have to do it in an operational environment where it counts,” said Post.

“The model that the Marine Corps is using for developing TTPs for tac [tactical] C2 in the air domain is invaluable and one that the Air Force could also leverage. We are iterating rapidly and refining concepts quickly, not by tabletop exercises or conferences, but rather by doing,” said USMC Lt. Col. Robert Rogers, 505th Training Squadron Marine Liaison Officer”

Rogers continued, “Exercises like Winter Fury allow the Marine Corps to quickly refine developing concepts and TTPs by actually executing them in a scenario and learning what works and what doesn’t work, as opposed simply hosting conferences or seminars. I believe the Air Force, as well as our other sister services, would benefit from leveraging this same model.”

Kirtland’s DMOC provided the Marines of 3rd Marine Aircraft Wing with realistic, relevant training opportunities necessary to respond to any crisis across the globe and win decisively in a highly contested, maritime conflict.

“The DMOC is the USAF’s most agile and low-cost warfighting environment and we’re using this opportunity to experiment with new concepts and procedures associated with JADC2 [Joint All-Domain Command and Control],” said USAF Col. Aaron Gibney, 505th Combat Training Group commander, Nellis AFB, Nevada. “The DMOC has established access and connections to the space, air, cyber, maritime, and land domains in the virtual world, and all it takes is a commitment to begin to work out what a true joint/allied C2 capability would look like in a distributed environment at the tactical level–the ability to focus on this problem set is what sets the DMOC apart.”


This entry was posted
on Thursday, March 10th, 2022 at 01:00 and is filed under Air Force, Aviation, Guest Post, USMC.
You can follow any responses to this entry through the RSS 2.0 feed.