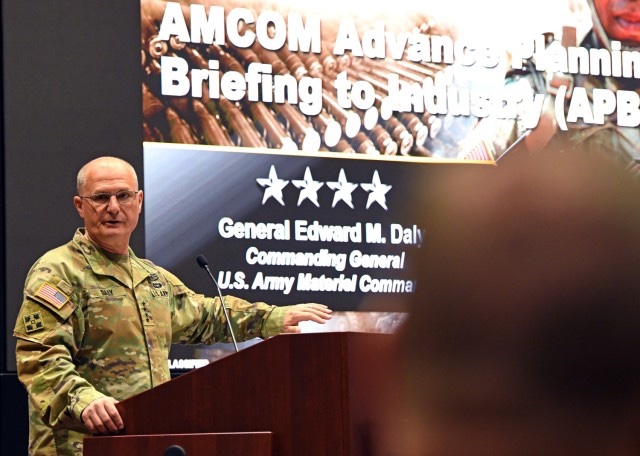 Due to COVID-19 conditions, the event was held virtually again. Although the auditorium was nearly empty, approximately 1,000 participants tuned into the three-day forum, which was packed with presentations from senior leaders throughout the federal government, as well as civic leaders, such as Alabama Senator Tommy Tuberville, Huntsville Mayor Tommy Battle, Madison Mayor Paul Finley and Madison County Commissioner Dale Strong.

Army Materiel Command Commanding General Gen. Edward Daly was the keynote speaker and described the APBI as critical and beneficial, as it provides predictability and situational understanding to the corporate sector.

“Those are what we are focused on during APBI,” he said. “Making sure the industry partners have predictability and situational understanding on where we are going depending on what they do in support of those areas.”

He said the theme of this year’s event, “government-industry partnership to support large-scale combat operations,” is more important than ever due to the real-world events occurring in Europe.

Daly said his priorities are aligned to those of the Secretary and Chief of Staff of the Army and noted that industry partners could assist in those areas, such as modernization and identifying vulnerabilities in the supply chain — not just shortfalls and gaps, but also quality and cyber threats. His final message to the virtual audience was a reminder that when it comes to industry, the size of the company does not matter.

“This is not just about large industry partners; this is also about small businesses,” Daly said. “We have balanced this approach very carefully so that so we can simultaneously take care of small business efforts, as well as our corporate partners. We have a common bottom line, and that’s the support of the warfighter — that’s our single, common bond — our ability in those partnerships to take the right actions to support the warfighter.”

More than half of the 73 tenants that call Redstone Arsenal home spoke at the 2022 APBI, and event organizer, AMCOM Ombudsman Eric Lampkin said the event has steadily grown each year. With that growth, he said the virtual option, while necessitated for the last two events due to the COVID-19 pandemic, will remain as an option, even when APBI returns to in-person attendees.

“Next year we anticipate doing a hybrid of both virtual and in-person,” Lampkin said. “The virtual option allows attendees to dial-in when it is relevant to their needs and as their time allows. However, nothing beats the ability to shake hands, meet face-to-face and network in-person, especially when it comes to the industry matchmaking event.”

The second day of APBI traditionally features a matchmaking forum, which allows small businesses to meet with large corporations, federal contractors and government organizations. Lampkin said hosting the matchmaking event virtually was challenging because you do not get those personal connections, so he looks forward to the crowds returning to the Bob Jones Auditorium next year.

Rodney Pennywell, who assisted Lampkin by coordinating the civic leadership involvement, attended the event as a small business owner. He said when he started attending APBI six years ago, the structure and focus were different; they did not address the needs of small businesses or provide opportunities for how industry could assist Redstone organizations.

He said, “Over the years, the presenters have dramatically tailored their message to the industrial base, particularly to small businesses, ensuring that they better understand RSA missions and related business opportunities. These presentations now truly address industry needs by giving advance notice of where the federal government requires industry assistance with developing innovative technologies and solutions to achieve long-term goals and objectives.”

Former AMCOM commander Jim Rogers works for a large defense industry partner and while he was not able to attend APBI this year, as the vice president of Army programs for his company, he encouraged employees from all over the U.S. to register and tune into the virtual event.

Rogers concurs with Pennywell. He said APBI is much more robust than it was when he served at Redstone 2010 through 2012.

“Our business areas are from the west coast to the east coast, and it’s not only the people who have interest in doing business with Redstone, but also our supplier diversity, which is the folks who are looking for small businesses who want to do business with us. So you have the whole gamut of people on the line listening about what is going on at Redstone Arsenal.”

The next APBI will be held in spring 2023 and Lampkin said the planning will begin about eight months prior to the kickoff. He said he hopes to be in person next year, with a virtual option for attendees, but regardless of the forum, the intent of the event will not change, which is securing partnerships between the Department of Defense and the private sector.

“It’s important that we communicate with industry so they know where to direct their energy and resources,” Lampkin said. “It’s value added to them and it’s also value added to us on the government side, because we can communicate the technology we are looking for, what we are trying to do, where we see ourselves in five years and where we need industry to help us get these things done.”


This entry was posted
on Monday, April 18th, 2022 at 00:00 and is filed under Army, Aviation, Guest Post.
You can follow any responses to this entry through the RSS 2.0 feed.