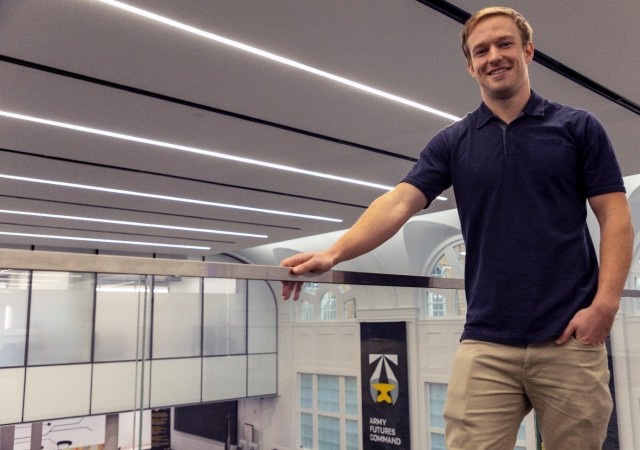 REDSTONE ARSENAL, Ala. — Anyone can submit a problem to the Army Software Factory.

To be clear, that is not just anyone at the factory, or in the formation, or anyone of a certain rank or office. Anyone in the U.S. Army can submit a problem to the Army Software Factory. It is an innovative concept but one that fulfills the promise of Army Futures Command.

When AFC was stood up in 2018, it was understood that it would not be business as usual. And when AFC opened the Army Software Factory in 2021, it was making good on that promise. The first-of-its-kind factory brings in rotating groups of Soldiers and Army civilians through a highly competitive application process and trains them in modern agile software development. Joshua Farrington of the U.S. Army Combat Capabilities Development Command Aviation & Missile Center, or AvMC, is one of those civilians chosen for a prestigious factory rotation. Farrington is currently in a three-year assignment at the factory located in Austin, Texas.

“Employees that accept a rotation with the Army Software Factory bring their unique perspectives and capabilities from their home organizations and share those ideas into our ecosystem which further widens our vision of what is possible,” said Maj. Christopher Bennett, product manager at the Army Software Factory. “In addition to building their collaboration skills, rotations of employees that come through the Software Factory will encourage innovation through context-sharing on problems and products. When more people see a greater variety of problems and pains solved by software across the Army, it helps build a repository of ideas more easily shared across teams to reference.”

The program starts with a 16-week boot camp. There are four different tracks — platform engineer, software developer, product manager and designer. Farrington is on the software development track.

When a problem is submitted, the factory has a team to vet it. They do interviews, an initial scoping, and then decide whether to accept the problem. Once a problem is accepted, the assigned team works with partners to build a web application to address the problem — providing the collaboration that Army Futures Command is striving to foster Army-wide. Currently, Farrington is working on an application that will assist the 101st Airborne Division in their air assault mission planning process.

Another innovative aspect of the factory is that it is “rank agnostic” with Soldiers solving problems for Soldiers — an experience that Farrington said has been personally beneficial.

“It has been impactful for me — working directly with a lot of Soldiers,” Farrington shared. “At AvMC, we were doing things for the Warfighter but I was not around the Warfighter. Now, here, I am on a team with three other Soldiers who have directly dealt with the problem we are trying to solve. My impact for the Warfighter feels a lot more tangible.

“I was a civilian at AvMC writing Army-related software and I just wouldn’t have the context on what the app was actually doing because I had never flown a helicopter. So a Soldier who actually understands the context of how an app is actually going to be used – it just makes it so much easier to make decisions. I think having more Soldiers writing software will be a huge asset to the Army.”

In the Army’s continuing mission to transform itself from the industrial age to the information age, the Army Software Factory is a key player in the future fight — one that will be as much in the virtual cloud as it is in the physical ones.


This entry was posted
on Thursday, June 2nd, 2022 at 00:00 and is filed under Army, Guest Post, Tac Apps.
You can follow any responses to this entry through the RSS 2.0 feed.